Add to Cart / Recommend to Library 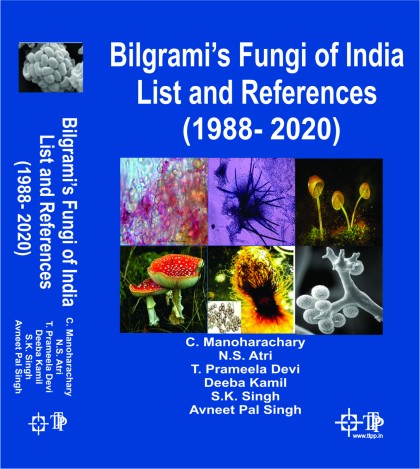 Fungi are omnipresent and cosmopolitan in distribution. Fungi are the second species-rich organisms group after Insects. Fungi play an important role in decomposition, industry, agriculture, medicine, biotechnology and many other related aspects of human welfare. 13 million fungi have been in the world. Today around 140,000 fungal species are reported in the world, while in India only 30000 fungal species are reported.  This is more challenging task to compile the fungal inventory as compared other organisms such as plants. Moreover, there is no red data book on fungi in India. Keeping in view the above aspects diversity, conservation and utilization aspects of fungi have much greater important.
The fungal flora of India is rich and diverse. One-third of the global biodiversity of fungi occur in India. The problems faced by the researchers are enormous due to the non-availability of complete data on the reported fungi from India. Hence, it has become important in bringing out up to date list of fungi reported from India. It has also become a necessity for fungal taxonomists. Therefore, the listing of Indian Fungi is important. Earlier, Late Prof.   K. S. Bilgrami and his colleagues had taken much of effort to bring out the volumes of Fungi of India, wherein they had mentioned about the name of the fungus, collection place, date/ year etc. along with its related references. The present revision of “Fungi of India” Part I includes fungi reported from 1979 to 1988 and Part II includes enlisting fungi from 1988-2020, with their complete data with 1051 references.